Alys Iarussi, in "Glory in the Golden Apple"

Results of My Layoff: A New Glory Gateway

As regular visitors to this site know, I was laid off last month from my job of five years

That was a downer, but having some extra time on my hands has proven beneficial to this site. Glory and the Golden Apple, for example, got two new episodes, several new cartoons, and a new gateway that includes the first use of color on the site.

No promised finish date....the last story I tried to write in a hurry was Charlotte's Mirror.

Three years later, it's still unfinished and still a disaster.

I'm still willing to send a free poster to anybody who can suggest a good ending for the thing.

Something Apropos From The Archives: "Let Go"

Let Go was the first story I ever published, although Say Goodbye To The Sea was actually accepted for publication first.

It's about a woman laid off from her job - which, at the time, had never actually happened to me. Now seemed like a good time to exhume it from the archives.

Speaking of stories that lack endings, Blue Flower of Happiness is now sporting a new one.

Blue Flower went up on the site as an unfinished story, had an ending tacked on just before Christmas, and then became unfinished again when I decided I really hated what I had written.

The new ending is better, I think, although I'd still hesitate to say Blue Flower is entirely done and I won't ever touch it again. There's some stuff I'd still like to work on, particularly Lee's closing words. 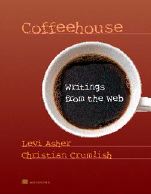 Amy Beauty Rose, one of this site's most popular stories, will appear in a traditional print book, "Coffeehouse: Writings From the Web", edited by Levi Asher of Queensboro Ballads.

To say the least, Levi and I didn't exactly agree on everything having to do with the way the book was put together, but we're still friends, which is saying something.

Levi hopes to set up a few in-person readings from the book in the New York City area. I'll let you know if that happens.