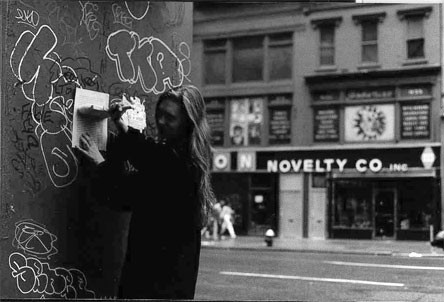 Me in 1994, on Broadway and Twenty-Second Street.

The Story Behind This Site

This web site is part of a project I began in the early 1990s, partly out of frustration. I was writing a lot of short stories, but I was having trouble finding readers.

Meanwhile, the streets around my apartment in New York City were full of posters advertising bands and theater events. I decided to turn my stories into posters.

The first posters were only the typed first pages of each story, with a phone number at the bottom people could call if they wanted to read the rest. I put them up all over the city, on lamp posts and in subway stations and in laundromats, any place people might have spare time to read.

I got hundreds of phone calls, and a lot of interested readers. People would call and ask questions about the characters. Some actors got together and made one of the stories into a play. I had fans.

Putting up the posters, which I usually did running away from cops in the middle of the night, was an experience in itself. One old drunken bum in a subway station on Second Avenue read the poster aloud in a voice as deep and lyrical as Paul Robeson. I made a deal with some anarchists who were putting up posters demanding war against the fascist state that we wouldn't cover up each others' work. A drug dealer on St. Mark's Place stopped selling Xanax long enough to ask for a story, take it, and tuck it carefully into his pocket. Also, I saw a lot of very big rats.

Once the posters were up, I used to spy on people reading them. People are very suspicious in New York about calling a stranger's phone number: I think I probably had twenty readers for every one caller. It was tough duty sometimes: there's no more honest criticism than when you can see someone walk away after the first paragraph. But I was really happy to see people of every size and shape reading the posters - school kids, homeless people, Wall Street yuppies, girl gangs, old ladies, everybody. So much conventionally published fiction in the U.S. is read only by a little subset of white, educated - maybe overeducated - literary snobs. It was cool to see my stories read by everybody.

After the election of mayor Rudolph Giuliani in 1993, putting up became rather futile. The city was better run, and the lamp posts got cleaned, usually overnight.

Fortunately, with the help of the Internet, I can now reach readers all over the world. This site has now been operating since September 1995, and has received thousands of visitors. Thanks for continuing to visit the site!