He was not the most promising of all that year's art history doctoral candidates - all the prizes had gone to a guy who had found warnings about Hitler in the 15th-century etchings of Albrecht Dürer - but his thesis on the early Impressionists had won him a six-month grant to do research in Paris. He got free lodging, too, in the apartment of a vacationing biology professor.

The address, among the offices of the 9th arrondissment, meant nothing to him. He was coming up the rue de Moscou when that suddenly, thrillingly, changed. His flat was above the precise corner where Gustave Caillebotte had painted in "Paris Street, Rainy Weather, 1877," a painting he'd written pages about. 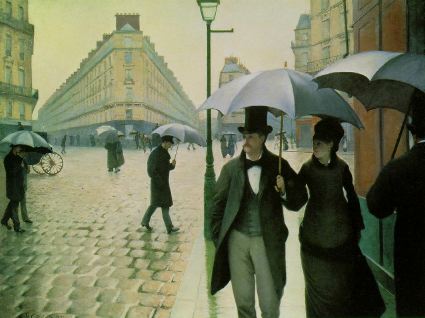 It showed just this intersection of six pie-pointed buildings, a star-shaped square full of men in bowler hats scurrying to get out of the rain. In the foreground, a man with an umbrella walked with a plain girl wearing diamond earrings. It was raining now, just the same. He was delighted.

When he got up to the apartment he put aside his bags without unpacking them and looked out the window, comparing the intersection as it was now with a color plate in a book he'd brought.

The cobblestones had been paved over, of course, and the coal shop in the background had become an insurance agency, but the pharmacy and the bakery shop were still where they had been. Some nitwit had painted the bakery fluorescent orange.

It stopped raining, and he went out for a walk around the neighborhood. He found the little cafe where Caillebotte must have sat to sketch out his painting. It was full of dismal French businessmen in checked suits and clashing checked shirts, but it still served the same sort of traditional French food the artist must have eaten, rabbit in beer and roast chicken and calf's head soup.

The discovery was enough to almost blot out the dismal train ride from the airport, past fast-food joints and streets full of ugly modern cars. The Paris he had studied for five years in the library at home was like a lovely balloon floating above a world of modern defects, a world where an ordinary guy walking on the street outside his house might know a plain girl with diamond earrings. A plain girl, but pleasant. Modern women only cared about how much money you made, and what you could buy them. Or they cared about how you looked, and he was too busy with his scholarship to worry about things like that.

Once his research began, he submerged himself almost entirely in the past. He spent his days in the library at the 19th century Musee D'Orsay, or sometimes at the 16th century National Archives. He hardly spoke to anyone apart for requesting documents, or ordering one old-fashioned meal after another in the cafe by his house.

Some afternoons, he sat reading in a small square out in front of the cafe. He sat on a bench, tilting himself slightly so as not to see a newsstand that wasn't in the painting. It was a very old newsstand, perhaps 80 years old, but it irked him none the less.

The girl joined him on a day in the middle of the week. He didn't recognize her at first. He'd been quicker to recognize the buildings. But it was her, a dead-eye double of the sort only possible in Europe, where every face in the street matches one on a wall in a museum. She had the rushed air of an office worker on her lunch break. It was the plain girl in the painting.

His entire life, it seemed, had led up to this moment. It was finally his turn. In this city where scholarship and history were respected, this girl would appreciate him, understand him, float with him above the modern world. He had so many things to tell her. He opened his mouth to speak.

The girl took a Pizza Hut pizza out of her bag, and ate it with the box balancing on her knees. Watching her his balloon vanished, leaving only the air inside of it.