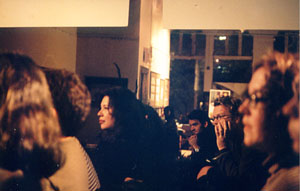 The crowd. Photos by Terry Baker.

Web Writers In The Flesh began the second show of its fall season on November 17 with a rather intimate crowd, as those on rainy nights tend to be.

Still, it turned out to be one of the group's funniest shows ever, with nearly every reader presenting a comic piece. Fitting, since the show had made it onto the into New York Post's Page Six with an entirely comic threat to present print literary doyenne Joyce Carol Oates with a "Maximum Tree Killer" award.

Oates, who was reading down the street from our event, has written 28 novels and countless other books of short stories and nonfiction. We told the Post that we didn't want to stop Miss Oates from writing, but we did want to "guide her onto the safe, clean, and economical World Wide Web, where the future of American literature is now being written."

Surprisingly, Miss Oates did not show up to claim her award, a foam ax. We did, however, get some nice e-mails from environmentalists. 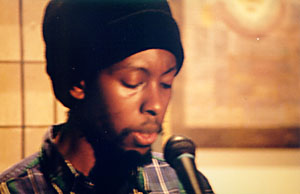 Anyway, the show started out well, with Papermag.com's Ron Mwangaguhunga, reading a great piece about his days as a teenage break dancer. He attended a break dance schoo l organized with the seriousness of a Kung Fu academy: when he reached worthiness, the sensei gave him his own square of linoleum. This piece even broke up the show's sound man, Gallery at 678 owner Sean Gibbons.

Following Ron was lexiconoclast.com's Jodi Shapiro, with a funny piece from Conde Nast's Epicure site about the gourmet qualities of Chicago street hot dogs. Even more of a crowd favorite was Jodi's second selection, an echonyc.com posting about her first kiss.

After six successful shows, Web Writers In the Flesh had its first no-show reader Tuesday night - a real miracle, if you think about it, since all the readings are arranged by e-mail and the participants rarely meet each other until the night of the show.

Instead, MC Xander Mellish took the mike for a couple of minutes, reading a small excerpt from her first-days-of-the-web serial Five George Washingtons. Reading a profile of the anti-web villainess, Oysterette Postman, she was backed by Rachmaninoff's passionate "Symphonic Dances." 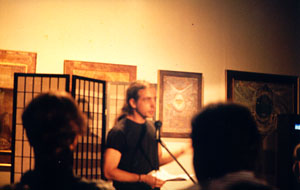 Next up was Terry Baker, making his second appearance as a Web Writer after making a big hit at the May 11 show. The curator of a new online gallery, Aero , Terry really knows how to use the web. After a somber piece about the conflicts of life with HIV, Terry finished up with a funny piece about his Brooklyn neighborhood, "where most of the people are over 65 and under four-foot-nine, chain-smoking like it's 1950."

Jameson Currier, the author of a new novel called "Where the Rainbow Ends," is really a print person, despite his recent appearance on www.blithe.com. For his audio-visual e lement, Jim brought two books and a photograph. Still, he was a good sport, and the crowd enjoyed his short story about a gay love affair.

Wrapping up the evening was Brett Leveridge, a real web pioneer if there ever was one. BRETTnews was one of the very first creative websites. In a great example of the Web's immediacy, Brett read a piece he had composed just four hours before, questioning why everyone at Thanksgiving time gets so crazy about turkey - which is, after all, a terribly "bland bird."