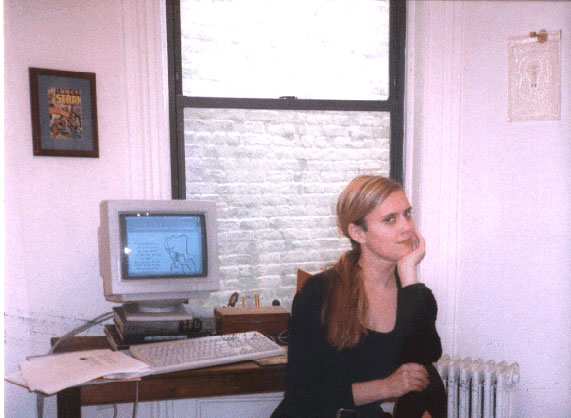 From My Desk to Yours

Leeor Weinreb, of Israel, has generously offered to translate this site into Hebrew, one of the world's oldest languages.

Hebrew is the seventh foreign language version of "Xander Mellish: Short Stories and Cartoons." With the exception of my own ham-handed French and German, all the translations have been done by the site's fans.

If you'd like to translate a small part of the site into your own language, let me know. I'd particularly like a Welsh version!

I Buy Art, And Here It Is

One's twelfth month of sporadic employment is usually not the time to start investing in art, but I did.

In early May, I went to an art show at the Grammercy Park Hotel, largely because my friend Jonathan Podwil had some paintings up.

It was truly an art show in a hotel - each of about fifty different galleries took a separate room, and laid out art across the bed spreads and in the shower stalls. Most of it was pretty high-concept - one piece consisted of a sausage that hit you on the head every time you walked through a doorway - and I wasn't crazy about anything, with the exception of some martini glasses that talked. (They made cocktail-party chatter).

Bored, I had a couple of glasses of wine, and before I knew it I was buying art.

My impulse purchase was an untitled piece by Eric Le Maire, a Parisian artist. Judging by his catalog, Eric's other work seems to consist of giant tubes full of hot water and burning mattresses, neither of which is suitable for my studio apartment.

The piece I bought, however, is a foot-square piece of glass, with a light bulb filament embedded in it, hanging precariously from a brass pin. It all looks quite innocuous, even a little dull, until direct light shines through the glass.

Then, the magical shadow of a light bulb appears on the wall behind the glass. It seems to come from nowhere in particular. As the light strengthens and fades, so does the lightbulb. It's a big old metaphor for creativity itself.