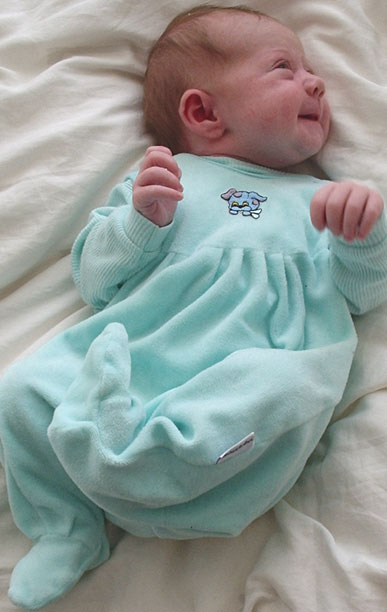 To my surprise and that of many others, Charles Leroy Mellish turned out not to be Charles after all. Instead, Georgia Elle Mellish was born on September 12, 2004.

Delivered by an all-female surgical team who were immediately impressed with her long eyelashes, Georgia did not have an easy passage into the world. Mommy was in labor for nearly three days before insisting on an emergency C-section. In the end, Georgia emerged fine and healthy and a full 9 pounds (4.2 kilos).

Georgia was named after George Washington - the original American self-made man - after choreographer George Balanchine, and after the fact that her grandmother was raised in Atlanta, Georgia.

She spends much of her time sleeping, breastfeeding, burping, and listening to the Beatles 1963-1966 CD she enjoyed in the womb, and which very effectively stops her from crying now.