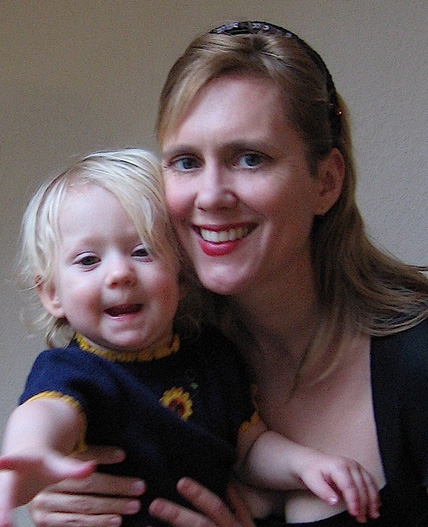 With Georgia, in the Roland Mouret Galaxy dress

While I have just posted several new episodes of Half-life, this website has otherwise not been updated in more than six months, and I apologize. It would be easy to say that while working full time, bringing up a toddler and running a household, it's hard to find time to write. And that's mostly true, but not entirely. Here are some of the things I have done during the six months, while claiming I didn't have time to work on the website.

·       Set up a MySpace profile, screwed around with YouTube, iTunes, and a variety of blogs, trying to convince myself that I am still hip and in touch with the kids.

·       Read My Big Touch and Feel Book - On the Farm over and over to a sleepy but demanding baby. Explained how an animal can simultaneously be a "hest" in Danish day care and a "horse" at home.

·       Repainted the kitchen after some Three Stooges-type construction workers poked giant holes in the walls and ceiling while fixing the roof.

·       Fell in love with Roland Mouret's Galaxy dress; went into debt to purchase one. Neglected to include 25% Danish sales tax in the purchase price. Flew to London for a weekend, with the baby, to pick up the dress, an expedition that was still cheaper than paying Danish sales tax.

·       Traced my family tree back to Hugon Dit Jarrett, a 14th-century resident of Vierges, France.

And so on. It seems that I do have plenty of time, but not the concentration to think deeply about anything. What the above have in common is that they all require a relatively short attention span. I rarely have any time to myself until around 8pm, and since I need to be up at 6, I am usually in bed by 10.

I know a serious writer would have the self-discipline to write whatever the circumstances, but hey, James Joyce wasn't doing extended breastfeeding.