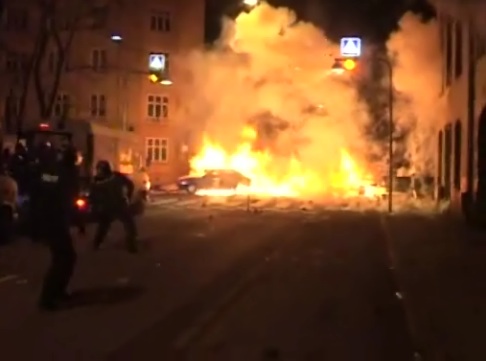 Riots outside my house on Christianshavn, Copenhagen, Denmark, after the closure of a local squatter center. Lots of tear gas, and the building next door got a Molotov cocktail in their front hallway. I was covering our windows with blankets to protect us from flying glass. Georgia thought it was all great fun.

Memoirs, they say, are the great refuge of writers who have run out of ideas.

That may be me, but at least this month I can offer you four new installments of Half-Life, three set in Hong Kong and one in my hometown of Wauwatosa, Wisconsin.

Why do people write about themselves, anyway? Partly to sort themselves out, I think, and in my case remind myself that I was once something other than a slave to housework, as I wash my third sink of dishes in a single day.

But it's also to explain ourselves to our children. I've always been fascinated by those Doris Day-Rock Hudson sex comedies of the early 1960s in part because they help me understand my parents - in particular, why women ever thought those frozen, beauty-parlour hairdos were attractive. Perhaps Half-Life will help Georgia figure me out some day.

Of course, some things about my 80s youth are going to be difficult to explain.

What was with those giant shoulder pads? I remember buying a Norma Kamali dress so wide it looked like it wouldn't fit through a door.